Stunning and savvy, Antje Utgaard is taking new media by storm as “A Gift from the Instagram Gods” a title endowed to her by MAXIM, and dubbed the “Next Kate Upton” by PLAYBOY, this Scandinavia beauty and major social media influencer has a solid following of 979K and 3.5 million loops on Vine. This blond babe is a true social media guru, Antje is available to share with her top tips to get Instagram ready, her fall fitness routines and social media tips for making the most out of every post and can develop exclusive content with her social media channels; all of this with the added touch of Antje’s unique sense of humor.
Antje has an electric drive and passion, and her own creative energy is the brilliant force behind the ideas for all of her photos and videos. Beyond her thriving modeling career, she is developing a highly anticipated video series, featuring behind the scenes look at her doing what she loves including, make-up and beauty tutorials, work out segments and comical sketches.
Born and raised in Wisconsin, Antje grew up in Star Prairie, Wisconsin a town of 500 on her 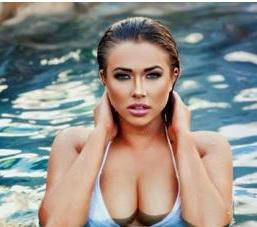 family-owned hatchery; where she and her siblings were known as the “Utgaard Chicks.” After the recession in 2008, Antje chose to enroll in Minnesota State University where she studied marketing and international business. It was there, she found her initial love in dance and toured with the Radio City Rockettes. While touring, she realized becoming a professional dancer was not her final destiny and discovered another passion in college after winning a local contest for modeling. From there, her Instagram following began to grow by the thousands and Antje knew that she had a definite new career path in front of her. After moving to Los Angeles, she began to rapidly expand her social media empire including Vine videos that have amassed over 3.5 million loops and she is just getting started.
In her free time, Antje likes to give back to charities that focus on under-served children and continuing to grow as an artist and entrepreneur.

Thu Mar 9 , 2017
Uber By Jack Barnes Just days after Uber found itself embroiled in controversy for its CEO’s dismissive and disrespectful treatment of a driver who confronted him over pay cuts, Uber drivers are launching a new social media campaign to fight for a tipping option in the app. The Independent Drivers […]