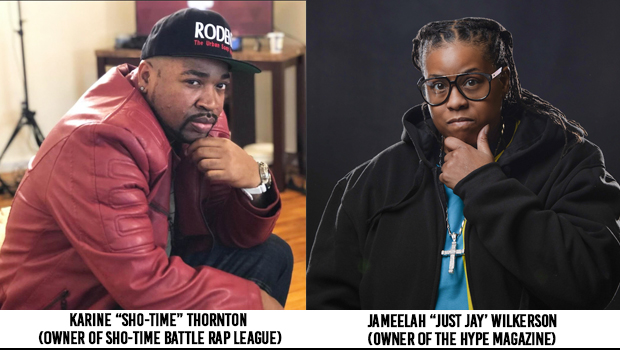 Calling all hip-hop heads! Friday, April 1, 2022, may just go down as one of the most historic days in hip-hop history.

On that day, Karine “Sho-time” Thornton (owner of Sho-time Battle Rap League) and Jameelah “Just Jay” Wilkerson (owner of The Hype Magazine) entered into a partnership to push the Battle Rap culture into overdrive. In recent years, the Battle Rap scene has escalated into a free for all sludge match with M.C’s and Industry icons taking their freestyle flows to the ring to prove dominance over their opponent. The skill of battle rap was made popular in the early 80s by rap royalty in the streets of New York. The term Battle Rap can only be defined as an impromptu freestyle that embodies bragging, slurs, insults, and bragging on an opponent in live face-to-face battle. Since the beginning, crews or leagues have spurned in the Greater New York area and beyond, representing some of the throwdest M.C. ‘s to ever grace a mic. “Just Jay” a trendsetter in the Battle Rap scene has been documenting and publishing epic battle rap events for years in The Hype Magazine. The partnership with Sho-time Battle Rap League and Sho-timeTV was the perfect opportunity for both Karine “Sho-Time” Thornton and Jameelah “Just Jay” Wilkerson to elevate the awareness of the skills and creativity displayed at rap battles.

The first event for the partnership was a joint collaboration held on April, 2nd entitled, “Sorry 4 the Wait”. The epic rap battle was held in Brooklyn with Sho-Time Battle Rap League and The Hype Magazine as the sponsors. “Sorry 4 the Wait”, a continuation of Karine “Sho-Time” Thornton’s series of Rap Battles that have been legendary in New York and the DMV area. From the Red Carpet to the Step n Repeat, the scene was straight out of a movie. “I’ve never seen so many cameras and flashes going off”, said Monsta Meezy, who hosted and moderated the battles. The guest list was star-studded with the likes of Konvict Music “D-teck”, Talk Radio, B-Way, Slimm Goodie, CoCo Nicole, Norma Bayts of Queen of the Ring, Unsigned Hype Magazine, Its da Wave Media, and the Kandiid App came thru with two models. The buzz around New York was crazy due to the promo efforts of both The Hype Magazine and Sho-time via social media and print. The participants, all legends in their own right, included some of the fiercest names in the battle rap circuit which included Pr3minition vs. Taj Milli, Crystal Renee vs. Dear Summer, Illa Da Mac vs. Eclipse 45, B Sincere vs. J Crump, and Bobbie T vs. Future 2 Fire as the marquee matchup.

The partnership of Sho-Time Battle Rap League and The Hype Magazine will further solidify the legacy of Battle Rap and create a long-lasting impression on hip-hop and beyond. The connection between the two media giants is an open invitation for battle rappers worldwide. The power of Sho-timeTv (Sho-time Battle Rap League) and The Hype Magazine will elevate both the exposure and reach for battle rappers. Unlike improvisational hip-hop shows such as Nick Cannon’s Wild n Out, the Sho-time Battle Rap League, features the grittiest battles with real-life commentary from the streets. Jameelah “Just Jay” Wilkerson, explains that “It’s the purest form of artistic expression in hip-hop today.”

At press time, Karine “Sho-time” Thornton and Jameelah “Just Jay” Wilkerson announced the sequel to “Sorry 4 the Wait”, which will take place on May 7, 2022. The event will feature a cypher and the participants will have a chance to be cast in the motion picture “Ppressed 2”, a battle rap film by Street Line Video.

About: The Hype Magazine
The H.Y.P.E. Magazine covers entertainment, fashion, new trends, and music’s influence on our world. More than just an average urban music magazine, The Hype Magazine services our readers and subscribers with a diverse collection of stories, interviews, and impactful editorials. HYPE is not a niche market outlet, our audience range includes fashion fans; gamers; movie nuts; MMA followers; EDM; rock, television personalities, etc., if it’s newsworthy we cover it.

Snoop Dogg Wants To Drop Nas And Tupac Unreleased Track ‘Daz Have The Files, Get At Him’